skip to main | skip to sidebar

I like to call myself a writer. According to the book I am reading, “How to write a Novel” a writer is someone who actually writes, not someone who thinks about writing. I do write for a large percentage of my waking hours, much of the time writing in my head, trying in vain desperation to get fragments of dialogue or character developments and plot twists down on the notes application of my handy I-Phone or writing on toilet paper and scraps of paper usually reserved for the shopping list by my recycling obsessed environmentally friendly wife. I write fictions novels that add in exaggerated parts of my own life or are completely fantasised concoctions wrenched from the dark depths of my ever swirling imagination. The factory within me is working overtime and I seem to be absorbing so much information of late that I need to get as much of it out as efficiently as possible before I burn out with information and thought overload.

This is why I have decided to start a new blog. This is blog number 3. I think. When starting a blog one has to ask oneself a very simple question. Why am I writing a blog? Then another question arises from the detritus sifting in my stuffy mind. Who am I writing it for? I am not a journalist or a well respected political commentator. I am not famous or rich. I am not a celebrity, be they A List or Z List. In my mind the fact that I am none of those things merely strengthens my decision to write a blog.

I have no specific affiliation to any political party but I am highly politicised in my views. I care about things. I care about too much it seems. I also have this strange and painful habit of thinking too much. It is not good for my health. So I thought it would be handy to use the internet as an outlet for some of these thoughts, in the effort to clear my head of all the different voices and inner gremlins vying for the diminishing resources of my increasingly frazzled brain. My neurones have struggled for years and if they do not get some breathing space soon they will all burnt out and leave me as a vegetable, consigned to the armchair watching mind numbing daytime TV programmes like Loose Women or inane game shows where people answer ridiculous questions decided by gimmicky fancy balls travelling along shiny, winding, cheap metal rollers on their journey to overpaid, snotty TV presenters.

What am I going on about? Are you bored already? OK, so am I.

Well how about this then for a change in direction. I just watched an excellent Storyville Documentary about the Vietnam War. It was called “Vietnam: How the War Was Lost.” It was 11.30pm at night and I have been trying to shrug off a permanent man flu cold that never seems to leave me, but that got worse over the weekend. I have not be particularly upbeat of late so I thought a little late night war documentary action would obviously help pick my mood up. This after I had just finished watching another War documentary on Channel 4 entitled “Churchill’s Darkest Decision”, about Winston Churchill’s decision to capture and sink the French Naval Fleet in 1940, after France had been occupied by Nazi Germany. Easy going happy evening viewing it was not. It was, however, nothing compared to the heart wrenching power of the Storyville documentary that I might have so easily missed had I not been flicking through the Guardian Guide because I was too exhausted to do anything else, after a day spent sneezing my way through 3 boxes of Kleenex Balsam tissues.

No matter how many programmes I watch about Vietnam I always learn something new. This documentary was beautifully filmed, edited and gave such a wide ranging and powerful selection of viewpoints that I could not help but be overawed by its impact. Even my wife, who had just been passing by the TV room in her usual pre bedtime routine of doing ten thousand chores all at once, was slowly drawn in by the fascinating tale and she ended up staying until the end. She was thoroughly depressed after it but was left enlightened and thoughtful, as was I.

I don’t want to present any plot spoilers and I think anyone who can should try and watch it but the basic premise is that there were 2 key events in late 1967 that the documentary filmmakers see as the turning point of the war. The first was a battle in Vietnam itself and the other was a student demonstration that was violently repressed by the police in the University of Wisconsin in the USA,. The stories of these 2 events and the effect it had on the people involved has left a mark so powerful on me that I had to start up this blog to write about it. It is a torrent of ideas and emotions and feelings that I had no space for even before all the events of the last year of my life. I certainly have little space for more internal conflict and confusion these insomnia ridden nights. So I am attempting to seek an outlet for my voices in the form of a simple blog in cyber space, without any of the luxuries or fanciful dressings of a novel or short story ,where I can hide behind fictional characters and dream like prose. This is me, raw, unadulterated, unedited me. And it hurts.

The image of the stone faced Madison City Police man who beat up unarmed students, peacefully demonstrating, as is their right and democratic duty, justifying his actions because he feels that anyone who does not obey authority and the orders and ideas of the President of the United States (POTUS) is a traitor, un patriotic or an anarchist, well that just astounds me. How anyone can turn away from facing their responsibilities and duty to challenge authority and their own representatives when they see images of the bodies of children burned by napalm also smacks me deep in the weakest part of my gut. The ignorance of tyranny and the tyranny of ignorance cannot be ignored. The Vietnam war is over but the struggle to make people who live in democracies realise their duty to not blindly follow authority and to continually challenge and question their so called representatives – albeit in a peaceful, civilised manner – is as urgent now as it was in 1967. Apathy cannot be excused, and life will not excuse it. From MPs morally corrupt abuse of their expenses to the wars in Iraq and Afghanistan, from greedy Bankers still making money even after their recklessness lays waste to many lives and opportunities, to the revival of religion and blind faith in exploitative authorities and ideas that cannot be backed up with rational, logical evidence, the battles people with independent, thinking minds face are as real today as they have ever been. Yet I often feel it is a losing battle. One in which the first victim is myself. Ridden with stress, frustration, disillusionment and the physical somatisation of those inner psychological turmoil’s, what is all my procrastinating worth? If people are happy in ignorance and are so blind that they only cry when the tyranny gets so bad, as all tyranny eventually does, that it comes to harm them and their loved ones, then who am I to trouble myself an m y simple soul about it all?

I hope some people watch that documentary on Vietnam and are as shocked by the fact that even a few of the people in it who still see challenging the views of a government or authority as on the same level as anarchy. Not only is that illogical and pure, simple minded idiocy, it is a very dangerous idea and viewpoint in and of itself.

The greatest lie ever told to humanity is that challenging authority or anyone who challenges authority is building a road to anarchy. The truth is that without the demonstrators, thinkers, writers, agitators and Gandhi’s of this world the road of blind obedience leads to tyranny.

RazaKam
London, United Kingdom
I am in the middle of a mid-life crisis, even though I have yet to reach mid-life. I am attempting to balance a myriad set of inner conflicts that threaten to shatter the well crafted facade around me. I became a father last year and love it and though I love my wife and daughter dearly, I yearn for resolution when it comes to the multitude of decisions and choices I am being forced to make as the demons around me vie for control. We all struggle to get the balance right, but the older I get the more important the battle becomes, and the more confused I get. I am in the middle of an adventure, but as exotic as it can get, within and without, I always feel a little too close to falling off the boat and into the murky polluted waters of the River Thames that is so unforgiving to those who trespass against it. 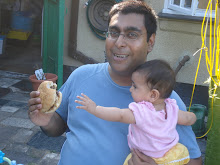 Blogs by My Friends